hands, feet, mouths, a marathon and a fish named Dry

I totally did it again. I jinxed the whole darn family again. A day after my last post a malicious virus appeared in the form of a high fever, vomiting, sore throat, etc for Cy. A few days later he broke out in a rash. Then it set in for Arlo. Same deal but with some bonus side effects like blistering fingers and feet.
It was Hand, Foot & Mouth Disease. Not the thing the cows get. Totally different. A virus. Not sure why they call it a disease. Regardless of what you call it, it was a nasty, pernicious little bugger.

Poor Cy had to miss his last day of school! We sent a note: 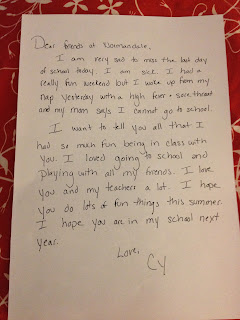 He was initially very sad to miss his last day until I reminded him that he "had" to spend the day in bed, watching movies. His dream day.

Anyways, the boys are better now. Just some lingering runny noses. Not at all contagious anymore. However, this mama woke up the past few days with a sore throat and a general malaise. Normally no biggie. This Saturday, however, I have big plans. I have been running (not nearly enough) to get in shape for the Twin Cities Half Marathon. I feel like I have barely crossed the "in shape-enough" threshhold to actually run this thing. Now I am hoping that this cold doesn't interfere. It is a big deal to me because I am running it as my personal "in memorium" tribute to Grandpa Cy who died last year at this time.  Keep your fingers crossed for me, will you?!

And now on to boobs. Have I told you that I am still breastfeeding? Arlo just turned 10 months and we are going strong. It aint easy though. Just today I had to sit in the kid-row of the mini-van in the "jump-seat" that is squeezed between the two car seats, angle Arlo on my lap & nurse in a parking lot because we hadn't been home in hours. Feeding a wiggling, pinching, hair-pulling, easily distracted 10 month old while Cy, who was strapped in right next to me, wipes his orange goldfish-eating sticky fingers on my blouse's sleeve is a challenge. Makes me daydream about what my girlfreinds are doing at THAT moment: having meetings, sipping coffee, checking facebook, in their super cute business outfits. And in moments like those I think about how this is probably the last baby and these are the last few months that I will be doing this. Ever. That makes me happy. And it makes me nostalgic & very sad. Such is the life of a mom of young boys.

By the way, if you want to hear a "real" breastfeeding story, ask me about the time we were driving to the cabin for Memorial Day and a tornado was on our tail and Arlo was hungry.

Anyways, I wanted to write about breastfeeding because I'm at the point where people are starting to say "you are STILL breastfeeding??!" "But he has teeth! He's so big"! blah blah blah. There's this moment in time where you go from being congratulated on still breastfeeding to being looked at funny (like I'm that mom on the cover of Time.) I swear there is no in-between. So let me explain something. Babies cannot drink cow milk till they're at least one year old. That's what's recommended everywhere. Google it. So they can either have formula or breast milk for the first year. Or a combo of both. I choose to give mine the gift of breastmilk. That's that. Dad, did you read that? ;)

Speaking of my dad, we had a great Memorial Day weekend up at their cabin.We reunited with Jim, Jeff & Carol whom we haven't seen since the winter and spent time with Lauren and her fiance Steve who just got back from Afganistan (so romantic, he proposed right when he got back!) And they asked Cy to be the ring bearer. He just beams when he talks about it.

So here are a few shots from our first summer escape: 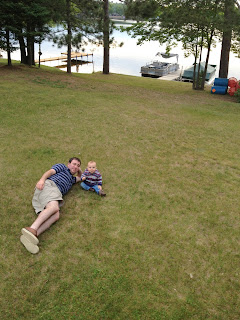 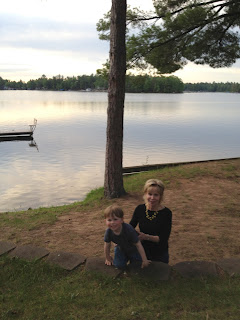 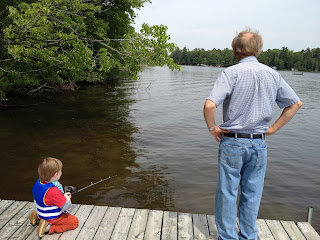 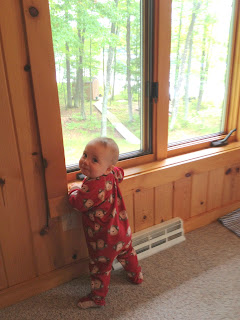 Arlo started consistently pulling himself up to a stand AND clapping the weekend we were up there! Hands, Foot & Mouth ain't going to slow him down! 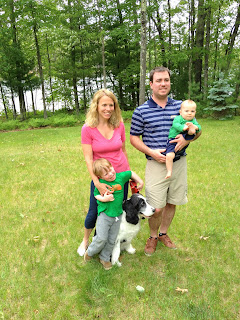 So after our trip Up North, we got back & Cy woke up on Tuesday with exciting news. He had gone 7 nights in a row with a dry diaper! Which meant he could have a pet fish!! You know the cliche about how kids make you feel like you are re-living your childhood? Well man oh man could I just feel the excitement of getting one's own first fish!! Happiest boy on the block I tell you. And the icing on the cake? He named him "Dry" in honor of his dry diapers. Cy & Dry. Has a nice ring to it. 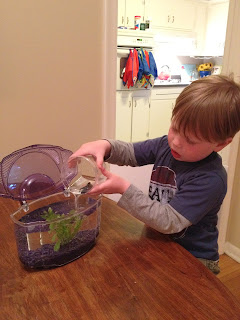 And finally, here are a few pics from our Cy & Mama outing this week: swim lessons followed by a romp through the Mpls Sculpture Gardens followed by breakfast for lunch at the Uptown Diner. 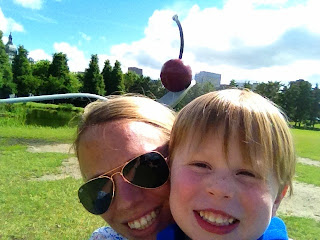 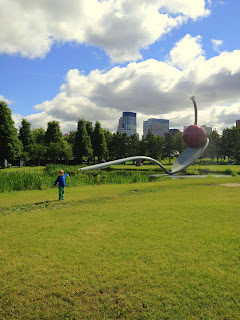 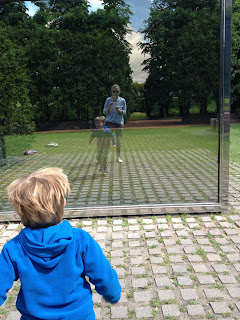 Amen sista! (about the breastfeeding)
You can remind your Dad that WHO's (world health organization) recommendation is to breastfeed for a minimum of two years. Which is what most of the rest of the world does.
I think it matters where you live too. Here I get the opposite reaction when I say I stopped breastfeeding at 18 months "Why did you stop so early?" "Did he wean himself?" Then I have to admit I was prego and couldn't handle both.
Tons of people here bf until their kids wean themselves, 2 or 3. I think it's beautiful.
F*#K Time magazine!