every time I get one boy down, the other either refuses his nap or just wakes up. Doesn't leave a lot of time for mama to sneak downstairs to the computer - or shower for that matter! I do, however, spend hours of time on my phone... since Arlo still continues to wake up at night... I read newspapers, blogs and facebook way more than ever before. I've started visiting a new site that my friend Katie told me about: Pinterest. It's totally addictive! It's like I finally have a place for all those mental bulletin boards I've been keeping.. ideas about gifts, design, travel, etc. Love it! Anyways, when I'm breastfeeding in the middle of the night my phone has become my "breast friend." The only thing that keeps me awake!

Even though we are hurting on the sleep factor and seem to be fighting colds, I'd say we've all been doing really well and have been having a lot of fun lately!

Patrick & I went to the Badger/MN game on Saturday. Total blast. We told the Emmer's we'd be home by 9 or 10pm and wouldn't ya know it: we were home, exhausted ,by 8:30pm! Can't hang with the big dogs anymore!

Cy is super into pretending lately. Every game we play: "Let's pretend I'm a firefighter." or "I'm going to put you in jail!" or "let's pretend this is our tent and we are camping." Usually during the day Arlo is part of the game too. He's a bad guy with mama. He's stuck in a fire. He's a bear at the campground.

Arlo is still a terrific, happy baby. Not so little anymore. He's a chub and my arms tire quickly carrying him around. He is smiling up a storm. He chuckles. He grabs things. He drools a lot and he loves to chew on his hands. And he coo's and babbles all day long. Sweetest sounds in the world.

We are looking forward to the upcoming holidays. Cy, Arlo and I just got back this afternoon from a trip to the department store to pick out special gifts from him & Arlo to the grandma's for the holidays. He loves to participate. Surprisingly it was quite fun even though I had my hands full! Cy even sat patiently in the minivan with me while I fed Arlo after our shopping adventure. (thanks to treats & the Ipod!)
He's already written Santa and said he wants more Berenstain Bear books and a magnifying glass... He also will randomly blurt out things like" I have an idea! Let's put out jelly sandwiches for Santa!" Don't know where he comes up with these things! 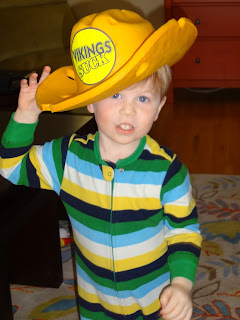 My kid found my hat and I'm afraid, Patrick, he's never going back! Cheesehead all the way! (Sticker compliments of a trip to Lambeau a few years ago..) 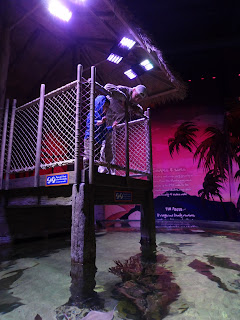 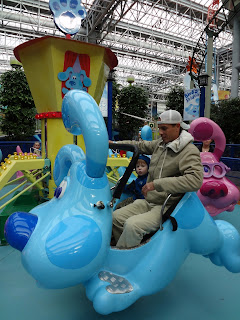 hee hee it cracked me up to see Mike sitting in the Blues Clues ride with Cy. He must really love his nephew because he would not typically submit himself to this sort of public humiliation 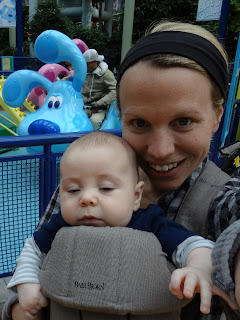 I was glad Mike came with so Arlo & I could sit on the sidelines while they went on ride after ride at the Mall of America. 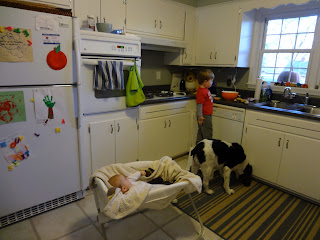 Making chocolate chip banana bread one day. Cy pretty much made the whole thing. Arlo supervised and Jackson cleaned the floor. Just another day at our house! 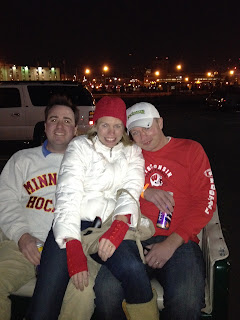 Patrick, his bestie Stevie and I took a rickshaw ride after the Badger game!!
Posted by Patrick, Jill, Cy, Arlo and Jackson (the dog!) at 1:59 PM