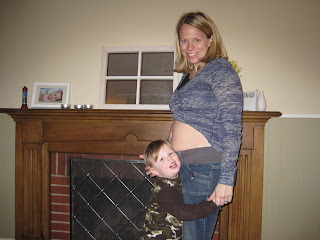 We finally told him! He was incredibly excited, asking "where will the baby eat? We have chocolate milk for him!" He also told us that his little brother could use his old bed and his baby toys and "he can sleep in my room with me if he wants." It was all very sweet. Now whenever I eat (which is pretty much all the time) he says that his baby brother is catching all the food. 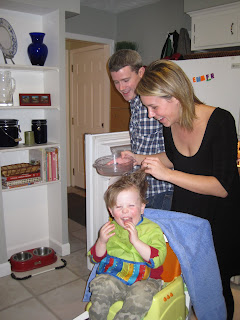 Dan and Jacy came over for dinner last week. Jacy, who regularly cuts Cy's hair at her studio, gave him a trim in our kitchen. She has magic hands. 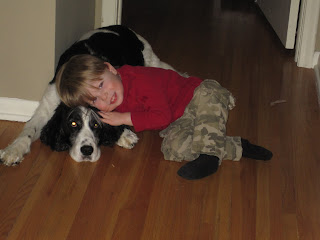 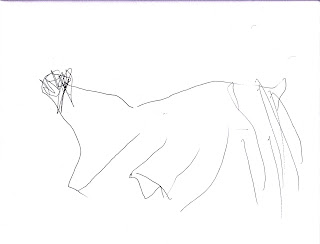 "Cow" by Cy. He just scratched this out on his own & handed it to me. I was pretty impressed. He LOVES to color and draw.
Our big news for the day is that Cy has gone a full 24 hours (including overnight) without one wet/dirty diaper! I think he is potty training himself. Hallelujah!
Since we got the news about the SCH I have been taking it easy and trying to improve my attitude. I felt hit pretty hard last week. I was a bitter, depressed girl for a few days. Grrrrr. Since we don't know if this is a new bleed, which would be considered "riskier," or the old bleed I am trying to take it as easy as possible for the next few weeks.
After that it is back to living by my doctor's original orders: "Don't lift anything heavier than a gallon of milk. When you can sit instead of stand, sit. When you can lay instead of sit, lay." But hey, I'm human and odds are that this thing (since it is now a "second trimester occurrence") is likely to stick around all the way to the end and there is just no way I can lay around or have constant help until then. So we have purchased more step-stools than you could ever have imagined.. a whole step stool system for getting Cy in & out of my car, one in the kitchen, both bathrooms, one to get on the bed. Virtually no lifting for me. We've also programmed the DVR to record lots of PBS kids. I've signed up Cy for some classes/camps this summer that he will do without mommy.
Here's the thing I've learned about SCH's. No one has a clue. It seems to me (from what I have read) that bed rest will not help some SCH's but for other SCH's it makes all the difference. Wish I could know which one I have. It also seems like it is impossible to predict anything: how long will it stay and what it will do (bleed out? reabsorb? stay?) The odds are in my favor that everything will be fine. Nevertheless, I have read that SCH's that appear in second tri are much more likely to stick around for a long time. They irritate the uterus. Sometimes they cause the uterus to contract or water to break therefore causing early labor. Early labor is my biggest fear (nxt to stillbirth of course but I can't even think about that.) I am just about 20 weeks. 24 weeks is considered "viability." After that the milestones just continue. So here's to 24 weeks!! And, just so you know, I believe in my gut (or should I say womb?) that we will make it all the way to the late 30's. I just need some closer milestones so time doesn't DRAG. I also look forward to 24 weeks as a point when I can breathe a little easier and feel the level of risk decrease a bit!
One more sweet thing to note... Patrick had his hand on my belly last week and felt the little guy kick for the first time! It was within a day of when our "August" baby would have been born. I'm pretty sure the little guy in my belly was telling us everything is going to be ok. :)
Posted by Patrick, Jill, Cy, Arlo and Jackson (the dog!) at 12:44 PM

you look great darling! glad to hear your little boy is healthy. hang in there. we are sending good energy and lots of love from portland!!!!!