Yeah, so for the past week Cy & I have succumbed to a cruel winter gripe. It's been pretty nasty. I am happy to say though that today there is a glimpse of light at the end of this thickly congested tunnel. We missed all of our classes this week. And I am sad, very very sad, to say that I did not participate in the Climb For Air on Saturday. I went to bed Friday and said a prayer asking for strength in the morning... but after a feverish night of coughing and little sleep, it simply wasn't there. I am so grateful to everyone who supported me and contributed to this event. Although it is humiliating to admit that I did not participate, I still feel pride in the amount of money I raised for charity!! I raised $305 for the American Lung Association!!! Thank you again dear friends and family for supporting me! I am going to do one event per year where I challenge myself and try to raise money for a good cause. It's fun!!

Cy!!!! There is sooo much new with him. He is all personality these days. He is learning a new word a week. Once he starts saying it, he becomes a little obsessed with it. Last week the word was "cut" and since he picked up the word, he has been demanding we cut the tags off every stuffed animal, rag, pillow, etc! He also likes to point out the little cuts he has on his fingers/legs. Today he started calling me "hun" because he hears his dad call me that.
Funnier than that though is that he has caught on to "pretending!!"
Tonight at dinner he randomly decided to pretend the apple he was eating was a phone. He put it to his ear and started "talking" to mama & dada.
Oh yes, the creme de la creme is his new pouty face. He likes to fake a pout - sometimes in jest of me or dad if we are whining. It's hilarious and I need to get that on film!
He also has been seen crawling around, barking, pretending to be a dog!
If you haven't seen him in a while, and you live nearby - you have to come visit!! He's a little comedian these days! 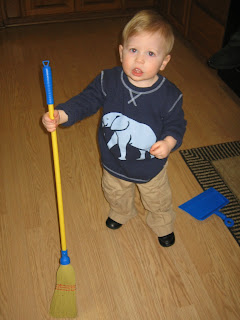 Cy sweeping. One of his new fav past-times. 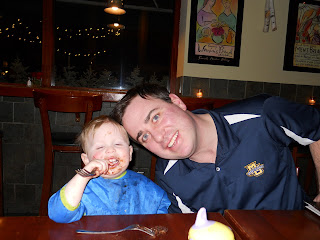 Having a chocolate dessert last night at French Meadow. 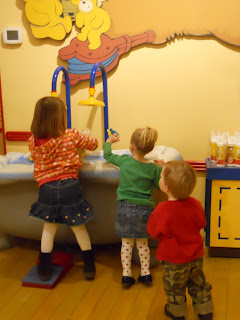 At the Build-A- Bear with Alexis and Hailey. They made a bear for their new baby brother Mason who will be here in April. 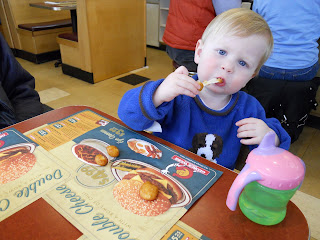 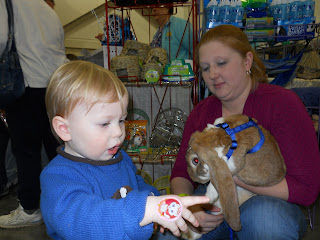 Testing out a bunny at the Pet Expo in Milwaukee 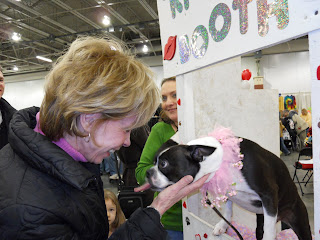 Grandma getting a smooch at the pet expo. 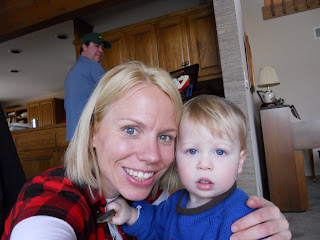 HI! Just getting ready for next week's Climb for Air: http://ala.convio.net/goto/jillemmer It is not too late to donate (even $5 will get me closer to my goal!) and thank you thank you thank you to all who have donated. I am sorry that those who wrote checks do not have their name/amount on the web site. Apparently it only tracks online donations! Nevertheless your donations are really appreciated!
Thanks again! 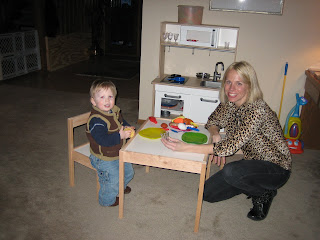 playing in Cy's Brookfield kitchen (I chopped and bleached my hair!!) 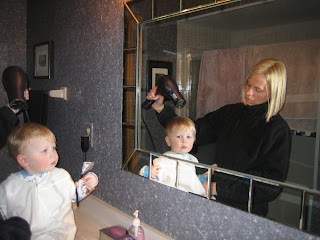 He likes an occasional blow-out. 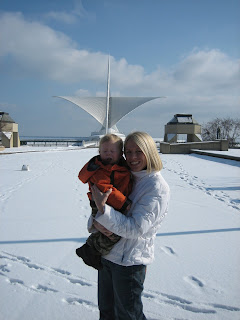 Outside the Calatrava on our way to the children's museum. Cy is light sensitive. Maybe he needs to get out more. 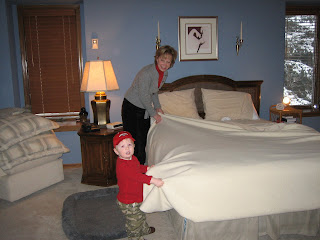 Helping Gma with their bed.

The week has been flying by. Patrick came back up to Milw from Chicago last night. He was there all week for bizness. Tonight is...... Fish Fry night!!!! YUM!!! I am addicted to RYE bread with butter yum yum yum. Anyhoo, another great week in Wisco! Family, friends, and a generous amount of mommy-time (thanks for the babysitting, grandparents) which included a day at the hair styler (her name is Shalin and she works at the downtown Erik of Norway and if you need a hairdresser, feel lucky I told you about her! She just came out of retirement -had 3 kids- and she used to be booked out for months in advance but she isn't yet!! Get in while you can!) Now, where was I.. oh yes, so I went to Shalin and she chopped & bleached my hair. I feel like I am wearing a wig. I really love it but it's quite different for me.
Cy has been running around Brookfield acting like he owns the joint. Telling Grandma and Grandpa where to go, what he wants to do. Telling us when the dogs don't have enough water or there is a spot on his pants he doesn't like. I say "telling" but he isn't really talking yet. He has mastered the art of grunting, babbling, pointing and facial expressions. So much so that I find myself telling patrick stories of something funny Cy "said."
Posted by Patrick, Jill, Cy, Arlo and Jackson (the dog!) at 3:41 PM No comments: