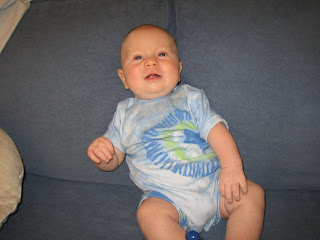 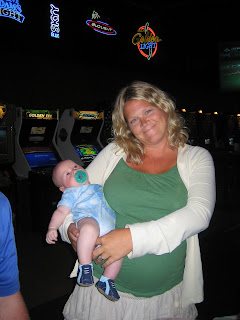 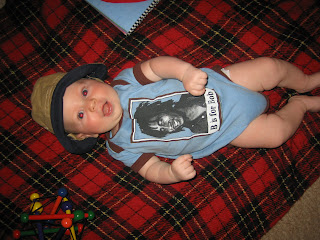 Here's a pic of Cy with his friend Annie Mac who has a friend 'cooking' for Cy! Sex to be determined.... but he/she should be here in about a month! Yay!
Wow, I can't believe how quickly this month flew by! Patrick says I am always hung up on 'time and space' and it is true I am. I am always saying things like 'just think a year ago right now we were...." or "it was a whole month since..." I wonder why I do that?
Honestly though we are coming up on the kid being 3 mos and it has gone by so quickly! Although it is far enough away now where I am already forgetting about the brutality of being 9 mos pregnant, having a c-section and being up all night with a newborn... I must be forgetting because last night I asked Patrick "when can we have a girl?!" and I was only half joking.. or not joking at all I think.
I think hanging out with a kid all day is (as the older generation says) 'a riot.' Although it forces you to act like a major geek sometimes like when I am driving around town (in a MINIVAN) singing super goofy made up songs and waving my hands in the air in a desperate (and mostly failed) attempt to keep Cy from crying his lungs out.
Speaking of geekness: have to tell you though- I am soooo excited. Yesterday I took Cy to JCPenny's to get his photo taken and he was sooo smiley - I think the photos turned out great! They are going to put them online on August 12th or sometime near then & I will post the link here. I had Cy pose with a teddy bear he got as a gift (from the Kaurek's) and the quilt in his room. Patrick said we should hire him out as a model. I think he was only half joking. We really think he is the cutest kid on the planet.
Two other things happened this week of interest. 1) My brother Mikey got to feel an earthquake for the first time. He lives in LA. He was on a conference call in his car when it occured. He said he had no idea what was happening at first and by time he figured it out, it was over. He said that it was a little scary and that his cell phone went dead immediately during the quake. 2) My Grandpa Cy who is 97 yrs old got his drivers license! Boy is he determined! It is my understanding that he got it taken away in June or sometime around then because he was in a car accident (which my entire family thinks was not his fault) and they take away the license automatically when someone his age is in an accident. So over the 4th of July Grandpa and company drove down to Shawano (which is like an hour in one direction) from the cottage so grandpa could take his written test. He eventually passed the test that was really hard (do you know how many feet you should be behind the truck in front of you?) And then this week back in Milwaukee he passed the driving portion! Amazing! You go grandpa!
Gotta go. Today we are going back to yoga and then meeting up with Godma Annie for fun!
Posted by Patrick, Jill, Cy, Arlo and Jackson (the dog!) at 8:50 AM

I have the best family in the world...love the blog!

I am so with you being the geeky off-key singing mom (need to learn new songs). I have gotten really good at making up my own lyrics to random tunes. :) Can't wait to see your little man again. Isla thinks he's cute.

~Mary (from mom and baby class)